First alpha release of Aekan, A blessing in disguise 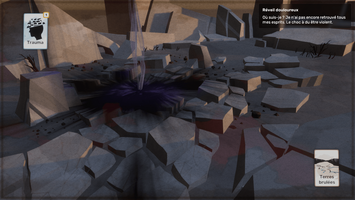 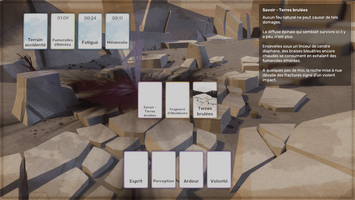 Let's make it clear : It's going to be a long journey.

I decided yesterday to release this early alpha of the game and as you'll noticed, the game is not finished. It's not even a finished demo.

While browsing itch.io, you'll found so many good games to play that you may wonder "Why on hell should I care about this early incomplete project ? Many arts are missing, this is supposed to be a narrative game and many card description are just empty. And what do you say,  the game is in French only? Dammit, I better forget this and move to anything else.." I'm pretty sure you could find a more appealing mini-game about Sailo Moon and Asuka fighting each other in order to decide who is the most iconic 80' female heroine (maybe I should note this idea).

And you may make the right choice if your will is just to play a good game right now. But I'm going to reveal why I still decided to publish this prototype.

As I solo developper, it's hard to make the right choices each time. I sometimes spend weeks working on a feature that nobody really care about.  And then, I removed it because I realized it was not as good as I in my imagination. I guess to try and forget is part of the journey when you are making a game, but I could spend my life trying things and never achieve anything good. I decided to released  this early prototype with a few gameplay mechanics that are just barely playable. Now I can start to check if they makje senses and if I can make something good on that base. And I'll need your help to take the good decisions from now.

My graphics skills are limited, so I focus most of my time on code, but I try to define the art direction.  Currently I'm doing this myself and I know it could be way better If I work with an artist. But I also want to challenge myself and try to do something different. I definitely need your feedback on the game art.

French... Why on hell this game is French only?  As I said it's supposed to be narrative and I wrote a lot in my native language because it's faster to iterate.  In a few days, I'm going to translate this demo in English, to make it playable for the majority. But at some point, I know I'll work with a good translator to rewrite everything in a great English.

There are so many decisions to take that you can help me to achieve this game.

To join me on this journey, try the game !

An adventure card game where you collect mighty artefacts and deal with moral choices.